When I Grow Up

“I was surprised, that’s the cool thing about AmeriCorps, you get to do things you never thought you would do.”
“Things I saw and experienced that year we unforgettable.”

At NGS we are always talking about how service years allow young people to feel entrepreneurial and help them uncover their passion and work they enjoy. Laura’s story is a testament to both of these points.

Laura Hanley majored in Liberal Arts and found herself a senior in college with no idea what she wanted to do next. She heard about AmeriCorps and that was a “turning point” in her life. She went on to launch the first “Connect” event in Indianapolis, distributed FEMA funds in beluxi, Mississippi after hurricane Katrina and moved a family with an infant out of a rat, mold and lead infected home. Laura’s adventure is inspiring and worth a listen.

“Don’t die for a cause, live for one”

Lindsey Tarr was an NCCC member and later team leader. Known for her inspirational leadership, she asked her team to write letters to one another after their of service. The words are powerful and moving, capturing the brotherhood/sisterhood that accompanies service.

To me, public services h 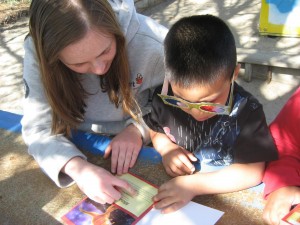 ave always liked felt like the foundation of any community, supporting individuals to thrive despite social, educational, economic and other disparities. As both a recipient and provider of services, I feel drawn to these efforts. I have been fortunate to work with several organizations whose missions align with my passion, and I am building a truly a fulfilling life path for myself along the way.

My first adventure in human services was working in a teaching group in Oakland, California for the AmeriCorps’s program Jumpstart. Jumpstart is a national early education organization serving preschool children in underserved neighborhoods. Its mission is to help children develop language and literacy skills in preparation for kindergarten and beyond. Over two years of service I worked as a practitioner of educational services as well as a group organizer to include the community in our educational endeavors.

Some of the most rewarding moments with my Jumpstart class were witnessing students engage with their parents through their education. Helping my students display schoolwork to their parents or share a book they read with them was very satisfying. Pick-up time became a sort of show-and-tell for the things students learned that day. Parents are truly children’s foremost educators, and having students link their formal education with them was tangibly accomplishing Jumpstart’s mission.

My utmost goal in my service with Jumpstart was to foster a sense of competence in all of my students. Every effort as a corpsmember – from instruction to parental contact to community programs – was to help students feel empowered in their own education. In turn, my service and my students empowered me to put my skills and interests to best use: to henceforth maximize resources for non-profit organizations. It became clearer to me that my life’s work should be to organize operations to provide the best services to the greatest amount of people. I am now working on this mission as a career by promoting leadership, organizational sustainability and community engagement. I thank Jumpstart for an amazing service experience and I thank my students for all of their hard work and optimism. 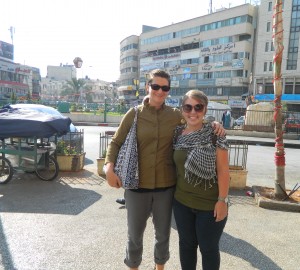 Megan and a friend on a trip to Nablus, Palestine

Tell us about the organization you work for and what you do for them.
I work for Kayan-Feminist Organization, which is a non-profit, politically unaffiliated Arab women’s organization in Israel. I volunteered with Kayan in 2009, and worked primarily on public relations and outreach. After I began working on my Master’s degree in Conflict Resolution, I teamed up with Kayan again to work on developing a program that empowers women to do peacebuilding work within Arab communities in Israel. In addition to helping to develop this program, I work on fundraising and development. An average day is usually spent at the office editing grant proposals and reports, or meeting with colleagues to talk about the upcoming Conflict Transformation training that we are planning.

Share a favorite memory.
One thing that has stuck out to me in my second time with Kayan was when I went to a meeting of the Forum of Arab Women Leaders, which is a network of community organizers that Kayan supports and facilitates. This was my first time out “in the field” since I’d come back, and it was really touching to see familiar faces, some of whom even remembered me. It was as if I was being transported back two years, except that the Forum has grown and is becoming increasingly sophisticated in its research and interventions.

What have you learned from your experience? How has it affected your long-term goals?
Well, obviously I’ve learned more than I’d ever imagined about issues of women and conflict transformation, fundraising, and development. More generally, however, I’ve learned that it takes a very long time as a volunteer to actually contribute in a meaningful way – unless you are with an organization for a significant amount of time, the gift is primarily theirs to give, not yours. This idea that Americans can descend upon international organizations and improve them is largely unfounded, and I think it’s important to remain humble in the work that we do. As far as my long-term goals, they have totally shifted since I came back to Kayan this summer. When I arrived, I wanted to work for international women’s organizations in conflict zones. After getting more involved in the community-level work that Kayan does, I realized that I actually want to give back in that way to my own community in the Pacific Northwest. The grassroots work that this staff does is immensely powerful, and I feel convicted to work to improve the quality of life for disadvantaged members of my community in America.

What is the most challenging part of your job?
The most challenging part of my job has been keeping up with all the various aspects that go into program planning: donors, grant proposals, logical frameworks, activity planning, target group, etc. Having never done this before, I have had to learn quickly what it takes to orchestrate programming in an organization like Kayan.