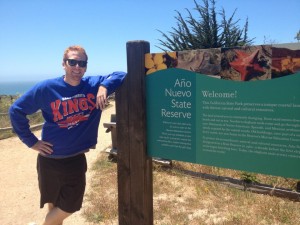 This Interview was originally published in the NCCC Newsletter in May 2012.

How many teammates did you have as a Corps Member? How many do you still keep in contact with?

During my Corps Member year, in Iowa, there were ten of us on Cedar 7 (including myself). I still keep in contact with a couple of them, as well as my team leader. One of my teammates and I share the same birthday, so we were able to celebrate it together, after our corps member year was over

.What were some of your projects? Which was your favorite?

Our first project was working in Cedar Rapids, IA, restoring homes that had been damaged during the flooding of 2008. After that, we traveled down south to Lake Charles, LA to rebuild homes damaged from the hurricanes of 2005. Our third round project was in Coralville Lake, IA, where we removed invasive plant species and performed prescribed burns. The next round, by far my favorite round, was working at a wildlife sanctuary in the Black Hills of South Dakota. The team helped in the day to day operations of caring for animals ranging from chickens, cats and dogs, all the way up to lions, tigers, and bears.

What were your most interesting/challenging accommodations?

Besides having the team sleep in one big room for a couple projects, the most interesting was probably living at the wildlife sanctuary. We stayed in a house right on the sanctuary grounds. I, along with the other males on my team, slept in the basement. Because we were there in spring time, we would wake up every morning to the various calls and sounds of animals trying to attract mates. Having 75 peacocks make mating calls at 5 AM can be very difficult to sleep through.

What are your fondest overall memories?

My fondest memories overall are the incredible relationships that I made. My team really became like my family, at times we would get on each other’s nerves, but we all knew we had each others’ backs no matter what. Also, the great connections I made with project sponsors and community members. I am still in close contact with our sponsor from the wildlife sanctuary, and I have been back on several occasions.

What was something you did for the first time?

For the first time in my life, I butchered a cow. At the wildlife sanctuary, local ranchers would donate cattle that were older, or injured. They would then have to be euthanized, and then chopped up to feed to the big cats (lions, tigers, leopards, and mountain lions). Initially, I did not want to participate, but my team leader encouraged me to do so. I’m so glad I did. As someone who ate meat at the time, it was a very humbling experience to be a part of. Seeing one animal give its life so that another may live is very enlightening. I recommend anyone who eats meat to experience this once in their life.

What was the most outrageous thing that you did?

The most outrageous experience was also at the wildlife sanctuary. When we first arrived at the project we were given the task of “spring cleaning.” This meant that because the snow had melted we had to clean out all of the animal enclosures. I’ve never experienced anything more disgusting. This meant getting into the Tiger enclosures (without the Tigers) and cleaning up excrement and carcasses that had been there for several months. Our whole team didn’t feel like eating for the rest of that day.

What was the most challenging part of your ten months of service? How did you overcome these challenges?

The most challenging part was living with a group of people that, initially, I shared very little in common with. Everyone on my team was so different from one another; I still can’t believe we didn’t tear each other apart. But what we shared was a desire to help others, and this can unite even the most opposite of individuals. The best way to get over the differences is to spend as much time as you can with your team, and really listen to one another. The advice, knowledge, and perspectives I gained from my teammates pushed me to grow in such a positive way. Even if you think you may never see eye to eye with someone, try to hear their side of things and their way of looking at the world.

Why do you think national service is important?

I believe national service is important because it gives individuals a connection to the greater communities around them. Not only is it important to give back to others, but by doing this you create a bond to other people and groups that you may not have already. I know for me, I really feel connected to this country from my time in NCCC. I feel like I have a good understanding and appreciation for what it means to be an American.

How has your NCCC experience affected your life?

My NCCC experience has changed my life drastically. Prior to joining NCCC, I was very unsure of where I wanted to go in the future. I graduated college with a degree in Film, but realized I didn’t want to work in Hollywood, or pursue it as a career. But after being in NCCC, I know that I want to lead a life of service to others. The fulfillment one gets from serving others is unlike anything else. Also, living with ten other people, who I never would have crossed paths with normally, made me incredibly flexible and appreciative of new ideas and different ways of thinking.

Do you have any advice for prospective Corps Members?

My biggest piece of advice is to take advantage of every opportunity that comes your way. The year as a corps member is one that will have a huge impact on your life, if you are willing and open to it. Try anything and everything. You may experience something that is your life’s calling, and you may not if you never try it. Be open to new ideas, new experiences, and new ways of doing things. The growth and knowledge you will gain will benefit you during your corps member year and beyond.