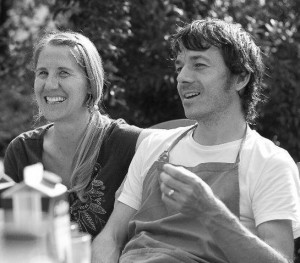 Ben, a native Englishman, has spent the last 20 years focused on growth and service. Whilst still in college he spent many hours volunteering with various organizations and upon graduation spent a year as an unpaid intern with a nonprofit that ran educational programs in schools. In 2000 he completed a Postgraduate Certificate in Elementary education which lead to a 2 year stint as a teacher.

At 28, when his friends were settling down and buying houses, Ben headed to the other side of the world, spending 6 months learning from and volunteering among the islanders of the South Pacific before undertaking a hands on leadership training course in New Zealand. During his time in New Zealand he travelled to Vanuatu, a small Pacific Island nation, where he saw a need among local youth to be challenged and equipped to realize their potential.

A year and half later Ben moved to Vanuatu, knowing almost no one, with a desire to be a part of seeing local young people championed and released into lives of purpose. Over the next 6 years he was part of a team that helped to establish a local branch of an international faith based nonprofit, focused on training and equipping local youth for service.

Ben met and married his wife Anna, a Colorado native, while living overseas. In 2012 they relocated to the States and Ben spent the next year or so trying to work out how to continue doing something meaningful with his life (aside from being an awesome father to two preschool kids). Ben started his own life coaching practice as a way of helping others on a similar journey find a way to live a ‘counter cultural’ life of service.

Whilst still trying to find his ‘fit’ in his new hometown of Fort Collins, Ben learned about a 3 month AmeriCorps position with Faith Family Hospitality, an organization supporting families experiencing homelessness. Financially this made no sense, but seemed like the best fit for his values, whilst creating a great opportunity to connect and engage within the local nonprofit and faith communities.
During those first 3 months Ben realized his potential impact might be limited by such a short commitment and he re-enrolled for another full term. That term came to an end in August 2014 but Ben is continuing to serve part time with his host organization, whilst taking a little time out to enjoy the latest addition to his family, child number three. Over the next year Ben hopes to continue working to increase the engagement of the local faith community in service.