We arrived at the Akanksha Foundation offices on the Monday morning of an Indian holiday, but the staff was in full swing.  We found the office buzzing with meetings behind glass doors, surrounded by student artwork and inspirational quotes about education and reform. We were there to meet Nina Sawhney, a fellow UCSD Alum (’10) and current teacher at the Akanksha Foundation, an organization leading India’s charter school reform movement. 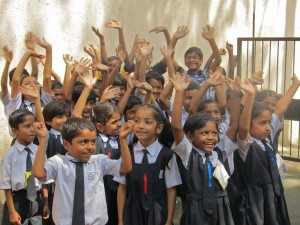 Students taking a break from their workshop on the solar system

Nina introduced us months ago to Akanksha in this gapper profile, giving us a brief look into Akanksha’s mission of education reform for India. Akanksha consists of three interconnected programs: The School Project, Akanksha Centers and Programs, and Art for Akanksha. Together, Akanksha is bringing cutting edge math, English, values and art education to Mumbai and Pune.

Thanks to Nina, we knew these basics about Akanksha before visiting. She worked to set up our visit with Alisha Varma, another young US college grad (Northwestern ’11). We met Alisha on a Saturday for a tour of some Akanksha classes. We sat down with Alisha, who shared with us some of these statistics motivating Akanksha’s work:

What Alisha proved to us then was that Akanksha was an organization whose  work is closely informed by policy and research. But what moved me was the way each Akanksha staff member and volunteer connected personally and passionately with the vision of a more educated child. We spent that day shadowing Akanksha classes, which were full of over-enthusiastic children – clearly itching to learn and practice their English. (You may have seen a sampling of Akanksha children here: telling you to GIVE YOUR GAP!)

After seeing the Akanksha model in action, we headed to the Akanksha offices for one last set of interviews with staff and volunteers. We all look back fondly at meeting Babita, a former Akanksha student who now works full time for the organization. We asked her (as we ask all our Gappers!) she answered passionately, “Everything that I am, everything I have come to be – is because of Akanksha.”

Our final interview of the day was with Akanksha’s new CEO Vandana Goyal. I want to share an excerpt from her interview verbatim: 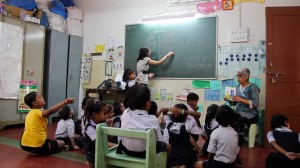 “As a young person who is just graduated from college or just a few years out of college, what you’re looking for is a challenge and what you’re looking for is that even though you don’t have a lot of experience, even though you may not have accumulated this wealth of skills, that you can still contribute in a really meaningful way. And for me, when I first came to Akanksha, it was that opportunity that got me so excited and engaged in the work from day one. So the opportunity that I think Akanksha provides any international volunteer or employee is exactly that. To be exposed to India’s greatest challenges, and the world’s greatest challenges upfront, every day. But more importantly to feel like one person can actually change things. Can change the reality of children’s lives, can change the reality of a community. And to have that experience as a young person is a very profound transformational life experience. It’s changed my life and I’ve seen it change the lives of our volunteers at Akanksha.

Akanksha was founded by a 20-year old woman, built by young college grads, and has developed into one of India’s front running education reform nonprofits. It seems impossible to imagine an organization more in line with the vision of GiveYourGap. Akanksha has combined young idealism with critical thought. It blends policy research with grassroots action, and takes its progressive stance on reform to a positive, fruitful partnership with the India government. It cares deeply about its individual students, about India, and it’s waiting for you to join the movement. 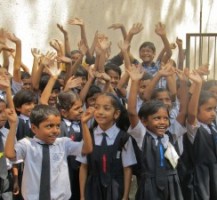